Manchester United beat Norwich City 2-1 at Carrow Road, reaching the semi-final of the Emirates FA Cup this season. Odion Ighalo scored the opening goal in the 51st minute of the match but United saw Todd Cantwell score an equaliser in the 75th minute of the match, which forced extra time with United struggling to find a winner. That came in the 118th minute with club captain Harry Maguire heading from close-range.

The first half of the game was missing a lot of things. United ended up with 67.5% possession, had eight shots – five of which were blocked with three being off target. Solskjaer’s side is screaming out for the likes of Paul Pogba, Marcus Rashford and Anthony Martial, who had all been rested, presumably to keep them fresh ahead of Tuesday’s visit to face Brighton and Hove Albion in the Premier League. The half ended 0-0.

United opened the scoring six minutes into the second half with Odion Ighalo scoring his fifth goal for United this season. Luke Shaw tried to cross the ball into the box but it was blocked before Juan Mata could reach the ball and it ballooned into the air with the Nigerian striker in the right place at the right time, finishing superbly putting the ball into the back of the net to put United ahead in the match. 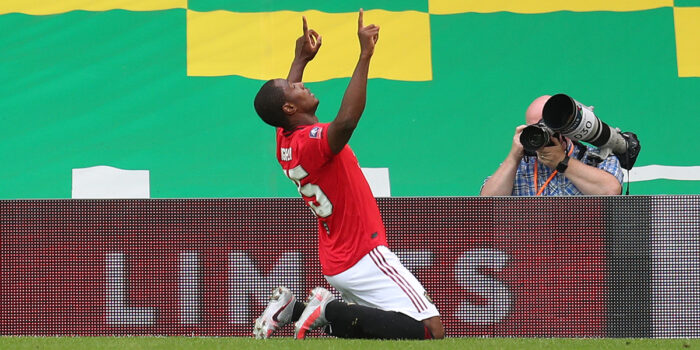 Solskjaer made a triple change in the 63rd minute of the match with United leading at the time with Brandon Williams, Marcus Rashford and Mason Greenwood all coming on with Diogo Dalot, Jesse Lingard and Juan Mata coming off. Minutes later, Norwich threatened and nearly equalised with the ball seemingly being cleared off the line, which was a close call for United, who were still 1-0 up in the match.

Norwich equalised in the 75th minute through Todd Cantwell, who is a player that Solskjaer should keep an eye on, although the 22-year-old predominantly plays on the left of midfield. The ball was worked across to Cantwell from the left and he unleashed a fizzing effort which swerved away from Sergio Romero and into the bottom corner of the net. It was unfortunate for the Argentinian, who has conceded four goal this season.

Solskjaer made a double substitution in the 78th minute of the match with Paul Pogba and Nemanja Matic replacing Scott McTominay and Fred with United needing to score again to be in Sunday’s semi-final draw. Norwich held off the pressure for a while but in a challenge Timm Klose was sent off for fouling Ighalo on the edge of the box after the striker rounded him and looked to threaten once again. 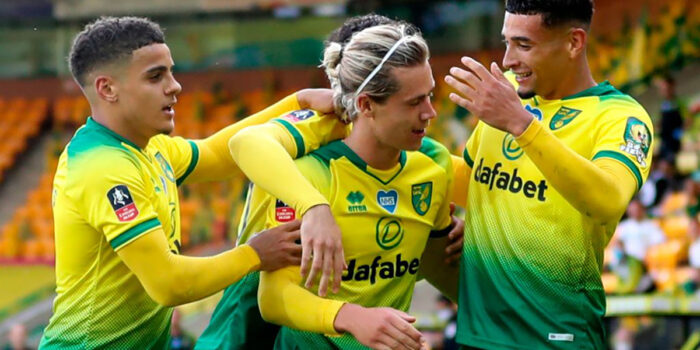 United still required more with the clock counting down with six minutes of time added on. At the end, United had a double chance to find the winner with Mason Greenwood coming closest to beating Tim Krul just before the whistle was blown with Pogba offside. The half was over and extra time was coming after the 1-1 draw with United needing to take advantage of having the extra man for another 30 minutes.

Solskjaer made his sixth and final substitution, the extra one because of the match going into extra time, bringing on Anthony Martial and taking Eric Bailly off, throwing it all at Norwich to find that elusive winning goal of the game which would put United into the semi-finals of the FA Cup this season. With Norwich down to ten-men, it so far, seemed to be a tough task with four or five attacking players on the pitch.

Pogba had a good shot on goal in the 104th minute of the match with Krul making the save with his arm then racing out to collect the rebound to stop United from taking any advantage. Martial then looked poised to score a minute later with Jamal Lewis putting the Frenchman off, stopping his side from conceding another goal in the game. United needed to keep throwing it all at Norwich. 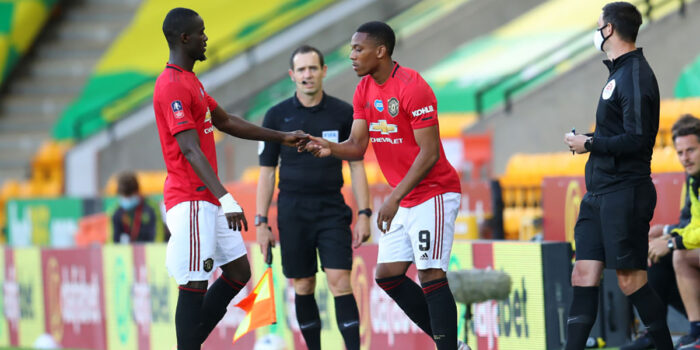 Towards the end of extra time, United were still throwing all they had at Norwich to try and find the winner. Harry Maguire had an attempt earlier in the half with United seemingly all over Norwich with the home club not having much response, possibly due to tiredness. Maguire scored the winner in the 118th minute of the match with a header, finally beating Krul from close-range.

United will now find themselves in the draw for the semi-finals of the Emirates FA Cup this season, which will be drawn at half time during the Newcastle United versus Manchester City match at St Jame’s Park on Sunday evening, which will sort out their opposition in the matches which will be played behind closed doors at Wembley on the weekend of the 18 and 19 July 2020, meaning United will have another match to play.