Manchester United beat Leicester City 2-0 at the King Power Stadium in the final match of the Premier League. Ole Gunnar Solskjaer’s side have finished third in the league this season, against all odds. Anthony Martial won the penalty in the 71st minute of the match with Bruno Fernandes scoring his tenth goal of the season, beating Kasper Schmeichel. Jesse Lingard scored a very late goal too, which was good for him. United will play UEFA Champions League football again next season.

United started well against Leicester but the home sides confidence started to rise as the game grew on. United had the ball in the back of the net through Bruno Fernandes but the Portuguese midfielders goal was chalked off for offside. It was a dangerous game that United were starting to play as Leicester were starting to get some chances on goal towards the end of the half. Fernandes had another chance, assisted by Mason Greenwood but he missed his opportunity to open the scoring. 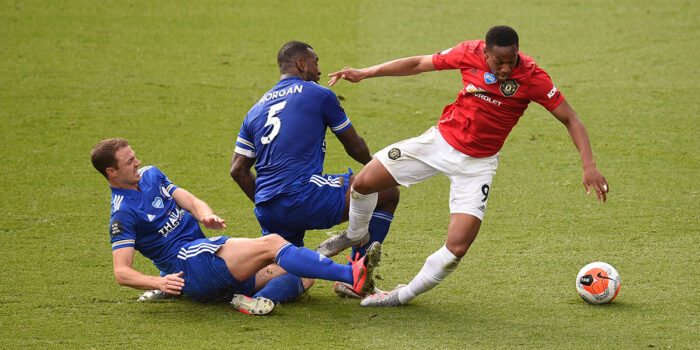 United opened the scoring 71st minute of the match with Anthony Martial taken down inside the box with both Wes Morgan and Jonny Evans closing in to stop the forward. Evans, the former United defender was booked. United won a penalty which Bruno Fernandes slammed into the back of the net, beating a dancing Kasper Schmeichel to take the lead in this important match. With Chelsea winning 2-0 against Wolverhampton Wanderers, this saw United move back to third in the league.

It was a nervy end to the match for United. It was not a good game for Jonny Evans either who was shown a red card for a challenge on Scott McTominay, who had replaced the goalscorer, Fernandes, in the late stages of the game. United, rightly, won a free kick for the challenge, which came to nothing got the Red Devils. Solskjaer brought on Jesse Lingard for Mason Greenwood earlier in the second half. Lingard scored a good goal to win the game for United. Tim Fosu-Mensah and Odion Ighalo replaced Marcus Rashford and Martial late in stoppage time.