Manchester United drew 3-3 with Everton at Old Trafford in the Premier League. It was a game of two halves for Ole Gunnar Solskjaer’s side. Edinson Cavani put United ahead in the 24th minute of the match with Bruno Fernandes doubling the lead with a sublime goal in the 45th minute. Everton got back into the game four minutes into the second half with Abdoulaye Doucoure getting a goal but three minutes later James Rodriguez had levelled United’s early lead. Scott McTominay scored what seemed to be a winner for United in the 70th minute of the match but in the last minute of added time, Dominic Calvert-Lewin levelled the score for Everton with David De Gea making two costly errors; Doucoure’s goal and Calvert-Lewin’s goal.

United started on the front foot against the Toffees. There was some early chances for United but they gained nothing from them. It was in the 24th minute of the match when United took the lead. Edinson Cavani was the goalscorer with the ball coming off his head once again – a favourite trait of his against Everton this season. Marcus Rashford delivered the ball towards the middle which took former United academy player Michael Keane out of his position. Cavani was waiting behind the defender and he headed his effort into the back of the net – he was never going to miss from there. It was another cracking goal for the Uruguayan who has become the number one striker at the club this season. 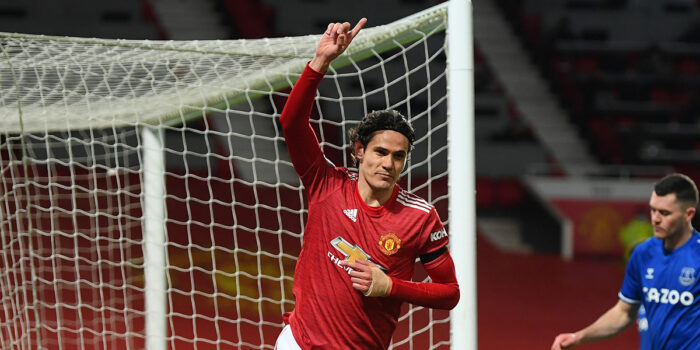 United were at that stage of the game the better team with Everton seemingly out of the fixture at 1-0 down. In the 45th minute of the match, United looked to be heading into the break with a two-goal cushion. Bruno Fernandes found space 25-yards from goal and instead of playing in Aaron Wan-Bissaka, he decided to send a curling effort towards the top corner of the goal, hitting his target and scoring his 18th goal of the season. Robin Olsen was at full stretch to try to deny the Portuguese midfielder from scoring but he could only watch the ball fly past him and into the top corner. It was a good goal for the player and a good scoreline for United at the time. Perhaps Everton would show up in the second half of the match?

At the end of the first half, Dominic Calvert-Lewin had a bog chance in added time with Everton sending the ball over the top with Wan-Bissaka switched off from the attack, playing the forward onside. He got one-on-one with David De Gea but saw his effort reach the wrong side of the post. That was a big miss for the Toffees. There were no changes at the start of the second half. United saw another effort on goal saved by Olsen. Fernandes was wiped out by Tom Davies but he managed to find Cavani in some space. He then reversed the ball to Luke Shaw who was 18-yards out from the goal. He hit his strike, which was a good one and forced a fully stretched Olsen to palm his effort away from danger. That could have been a good goal for United. 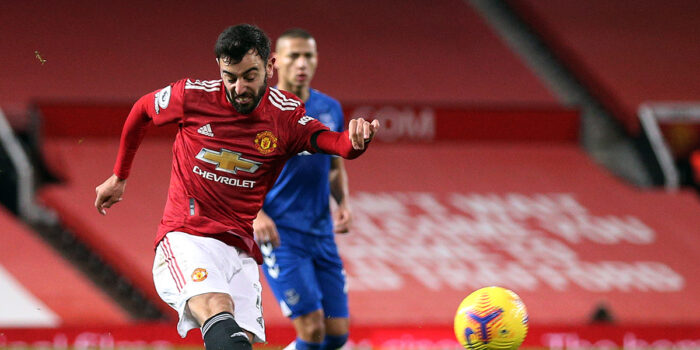 Everton got themselves back into the match four minutes into the second half. Davies got the ball in behind Harry Maguire which was picked up by Calvert-Lewin. He got to the by-line and scooped the ball into the middle which was poorly palmed away by the Spanish number one. Abdoulaye Doucoure then pounced on the ball, beating De Gea in close-range with the goalkeeper once again looking at a mistake which could become costly for United. Everton then got another, levelling the scoreline just three minutes later. Lucas Digne sent the ball into the box, which was kept alive by Doucoure. He then fizzed the ball back to James Rodriguez, who had a poor first half, firing a fine volley into the back of the net. What a poor defensive showing by United.

United would have to weather the storm that Everton would bring to them after levelling the score, which could be a difficult period of time for them. There were a few opportunities by both teams after the score was levelled but nothing to really change the game. United got themselves ahead in the 70th minute of the match through Scott McTominay. The Scotland international won the first ball despite having five defenders around him, flicking his header. The ball looped towards the bottom corner and Olsen lost his footing. He got two hands on the ball but it found the bottom corner, putting United in the lead once more. United will not be too upset about the goalkeeping as it put them back in front, despite being in a winning position at the break. 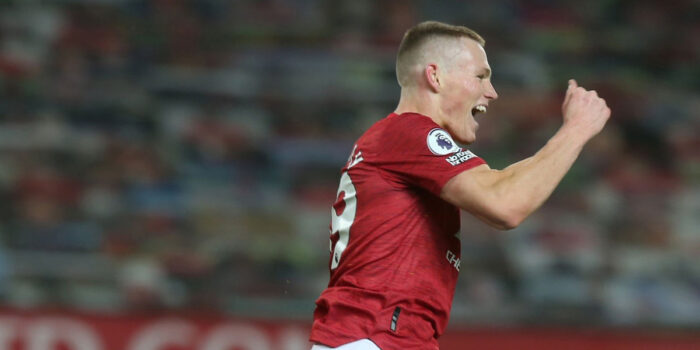 It seemed like it was going to be a narrow win for United, going into added time, which is dangerous territory. All was going well. Solskjaer decided to bring Axel Tuanzebe on for Mason Greenwood in the third minute of added time, to use some of the time up. He was booked in the fifth minute of added time which also saw Everton level for the second time in the match. Calvert-Lewin took the opportunity to share the points in the match, which feels more like a defeat than a draw. De Gea was poor for the goal, not really cutting it out of making much of an attempt to make the save, seemingly leaving fate to decide whether it was scored or not. This was his second error in the match and a costly one for United. Ir was not good enough from him at this stage of his career.