Manchester United beat Derby County 2-1 at Pride Park in the opening pre-season match this summer. Ole Gunnar Solskjaer’s side was youthful, in both halves but they did the job and got the win, although fitness was the main thing to gain from the match. Tahith Chong opened the scoring in the 18th minute of the match with Tom Heaton making a few good saves in the first half. Facundo Pellistri scored United’s second goal, assisted by Shola Shoretire in the 59th minute. Colin Karim-Richards scored a consolation for the home side in the 70th minute of the match. Queens Park Rangers are next for United, playing on Saturday afternoon.

It was a good opening display from both United and Derby in their opening friendly of the summer. Solskjaer named a very young side with little experience but the signs were good from the off. Derby did try to get something from United in the early stages of the match by Tom Heaton made a good save to deny the home side from taking the lead. United then started to get themselves into the match, pushing forward through Juan Mata, who looks like he still has something to give this team, even if it is just experience. Derby nipped the attack down by Tahith Chong managed to punish the defender, grabbing the ball and slotting it into the back of the net to put United ahead in the 18th minute. 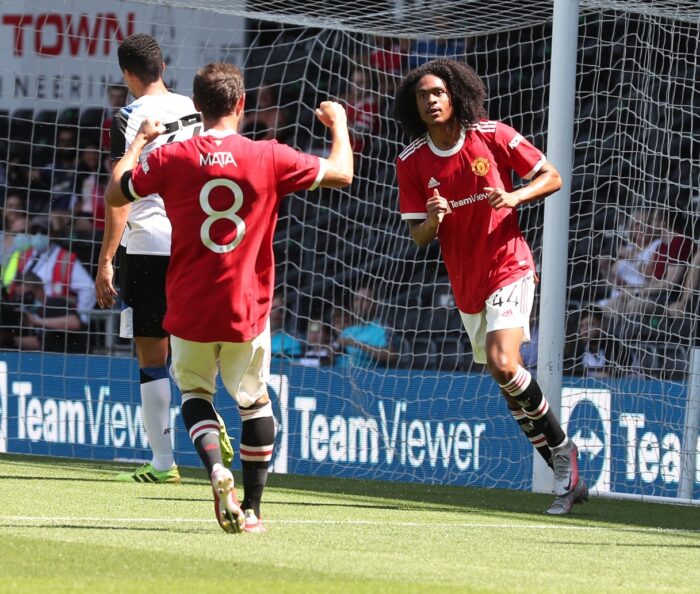 In the 37th minute of the match, approximately 20 minutes after the United goal, derby were building something in the United box, putting pressure on the defence. Heaton, once again, made a superb save to deny the home side from levelling the score. It just goes to show that even with a majority youth team on the pitch, United still have what it takes to get the better of some teams. Derby will no doubt be frustrated so far not to get a goal back, having ample opportunity to do so. United then started to pressure Derby once again, sitting on the edge of their box, pushing forward to find another opening. The half ended with United still 1-0 up after a decent first half for this toughly United team.

At the start of the second half, Solskjaer made nine changes to his starting XI. Lee Grant replaced Heaton, Ethan Galbraith, Alex Telles, Nemanja Matic, Andreas Pereira, Shola Shoretire, Facundo Pellistri, Jesse Lingard and Joe Hugill replacing Aaron Wan-Bissaka, Brandon Williams, James Garner, Dylan Levitt, Anthony Elanga, Juan Mata, Tahth Chong, and Mason Greenwood. It did not take long for United to double their lead with Pellistri, who spent last season on loan with Alaves in Spain, putting United 2-0 up in the 60th minute of the match. It was a good finish for the Uruguayan. Solskjaer made two further substitutions with Di’Shon Bernard and Will Fish replacing Axel Tuanzebe and Teden Mengi. 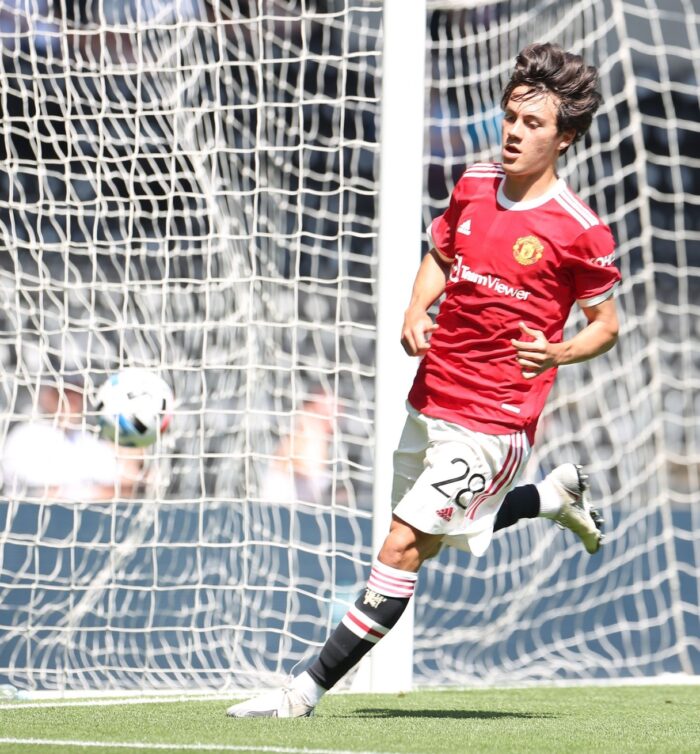 Derby got a goal back in the 70th minute of the match with Colin Karim-Richards thundering an effort past Lee Grant, who used to play for Derby before signing for United a few years back. The goalkeeper could not stop the effort from hitting the back of the net, which excited the Derby supporters in the stadium. Minutes later, Jesse Lingard almost restored the two-goal cushion for United, launching a strike on goal, which hit the crossbar and went back out into play. It was an unfortunate miss for the former academy player, who had a good loan spell with West Ham United in the second half of last season. It was a shame he did not score the goal, or the chance he had later in the match.

United had a few chances to score more goals but they never came. Derby seemed to tail off after their goal, which will give Wayne Rooney some problems ahead of the season commencing. He will be impressed with Teden Mengi, who he will want at Derby for the new season and Solskjaer will allow that to happen as the lad is a good prospect and will be seeking to achieve in the not too distant future. The match ended 2-1 to United with Tahith Chong and Facundo Pellistri scoring the goals and Colin Kazim-Richards scoring the consolation for the home side. United face Queens Park Rangers next Saturday in their second pre-season match. They will then face Brentford and Everton at Old Trafford with a trip to Preston North End in between.