Manchester United start their pre-season campaign against Derby County at Pride Park on Sunday afternoon. It will be the first pre-season campaign since the summer of 2019 when United faced Perth Glory and Leeds United in Perth, Australia, Inter Milan in Singapore, Tottenham Hotspur in Shanghai, Kristiansund in Oslo, Norway and AC Milan in Cardiff, Wales. United played just one pre-season match last summer, losing to Aston Villa at Villa Park a week before their season started. This did not help United prepare for the new season, which started poorly for United as they were beaten three times, drawing once and winning twice in three opening six matches. However, the season ended on a better note than it started.

Ole Gunnar Solskjaer will be seeking to get something started for his team this summer, getting the majority of the team fit and ready to face Leeds United at Old Trafford in the opening Premier League match which will be played on Saturday 14 August 2021 at 12:30. Because of Euro 2020 and the Copa America, which were both delayed from last summer, Solskjaer will be without many of his first team players for this match, including David De Gea, Diogo Dalot, Victor Lindelof, Harry Maguire, Luke Shaw, Paul Pogba, Scott McTominay, Fred, Bruno Fernandes, Daniel James, Marcus Rashford and Edinson Cavani, plus Eric Bailly and Amad Diallo will be representing the Ivory Coast at the Olympics in Tokyo this summer.

How United have faired against Derby County.

United and Derby have met many times in the history of both clubs with a total of 108 competitive matches between the two clubs. United have won 47 times, drawing 29 times with Derby taking the victory 32 times. United last met Derby in the Emirates FA Cup back in March 2020 with Solskjaer’s side winning 3-0 with goals scored by Luke Shaw and a brace from Odion Ighalo, who has now left the club. Derby beat United in the prior match, which was in the Carabao Cup, a 2-2 draw with Juan Mata and Marouane Fellaini both scoring but losing 8-7 on penalties after Sergio Romero was sent off and Lee Grant making his competitive debut for the club. Phil Jones saw his penalty saved, which was the end of the road for United in the competition that season.

Wayne Rooney is currently the manager of Derby and has been at the club since August 2019, after returning from the MLS side DC United. Rooney was a player coach but was not eligible to play until January 2020. He was made the interim manager of the Championship club following the sacking of Phillip Cocu. On the 15 January 2021, Rooney retired as a player, focusing on managing Derby for the remainder of the season. His side evaded relegation on the final day of the 2020/21 season, keeping the club in the Championship for at least another season. Derby currently have former United player Tom Lawrence at the club and Teden Mengi was on loan there last season, with the club wanting him again. Ravel Morrison is currently training with Derby.

Tom Heaton came through Manchester United’s academy and was a United player from 2002 until 2010 but never represented the club competitively. Re-signing for the club this summer as a free agent, Heaton will be able to put on his gloves for the club, perhaps for the first time competitively. There is somewhat a goalkeeping dilemma at the club with David De Gea and Dean Henderson seeking to be the first choice goalkeeper at the club and Lee Grant signing a new contract, it would see that Heaton could have been brought in to add some experience, for instance if De Gea leaves the club. It is expected that Heaton could start against Derby County this weekend, which Henderson overcoming an injury, De Gea on holiday and Grant already playing a lesser role at the club. Heaton played 200 times for Burnley, performing well against United at times.

United will be without the likes of Harry Maguire, Victor Lindelof and Luke Shaw for the first few matches of pre-season because of their involvement in Euro 2020. Against Derby, there will be an experienced defence with possible Aaron Wan-Bissaka and Alex Telles playing in the fullback positions but with Axel Tuanzebe and Teden Mengi starting in the centre of the back four. Eric Bailly is also out of action because of his involvement in the Olympics for the Ivory Coast. Will Fish and Brandon Williams could also find some involvement in this match, but Phil Jones looks set to miss it, having not been seen training with his teammates this week, which does not look good for his future at the club. Perhaps he is still getting over his knee injury, which kept him out of the entire 2020/21 season with him last featuring for United in January 2020.

Solskjaer will be missing Paul Pogba, Scott McTominay and Fred because of their involvement in Euro 2020 and Copa America. Nemanja Matic has been readying himself for the new season and could well start against Derby but I think the due of Andreas Pereira and James Garner have a better chance of starting as both players will need to secure loan spells away from United as Garner looks to gain more experience, preferably in the Premier League and Pereira will be surplus to requirements once again. This could be a good match for Garner as he will be able to show Solskjaer what he’s got in his locker and with United not having another defence midfielder at the club, other than Matic, Garner could carve out a place in the first team. A season of playing in the Premier League, on loan, would give him much more ahead of the 2022/23 season at the club.

Bruno Fernandes, Marcus Rashford and Daniel James are out of action because of their involvement in Euro 2020 and Anthony Martial is still overcoming an injury which kept him out for the end of last season. Solskjaer will have more fringe and youth players than he will have experience for this first game of pre-season. Facundo Pellistri could start on the right-wing against Derby with Juan Mata slotting in the middle of the three behind the striker. Anthony Elanga could feature on the left-wing, which would be good to see as he was given minutes at the end of the season with United confirming their second-placed finish in the Premier League with many first team players rested for the UEFA Europa League final. The likes of Jesse Lingard, Hannibal Mejbri, Shola Shoretire, and Tahith Chong could well feature in this match, which would also be good to see.

Mason Greenwood is the only experienced forward who could play in this position against Derby. Edinson Cavani is missing because of his involvement in Copa America, Martial is returning from a knee injury and Rashford is out because of his involvement in Euro 2020, which saw England reach the final, only to be beaten by Italy on penalties. Greenwood has been playing a wide role of late but has featured as the main striker on a number of occasions and that is probably the position that he will end up playing at some point in his career. Solskjaer wants it, United want it, the fans want it and the player wants it too. Joe Hugill, who rose to fame in the academy last season, could feature against Derby, which would be good to see as his goalscoring antics were impressive last season, finishing with 16 goals and three assists at both U23 and U18 level last season.

There are likely to be many substitutions against Derby with Solskjaer seeking to give most of the players that are available to him a run out against the Championship side. Both Lee Grant and Dean Henderson could be available in goal with Brandon Williams and Will Fish in the defensive positions. In midfield, United have the most players available with Jesse Lingard, Nemanja Matic, Hannibal Mejbri, Di’Shon Bernard, Shola Shoretire and Ethan Galbraith all available. In the attacking positions, Tahith Chong and Joe Hugill could play a part in the match. Obviously, this squad has been built by the players who have been training this week and there could well be more additions or some players not being involved at all. In the coming weeks, United will start to welcome back the more experienced players so they can get the new season started. 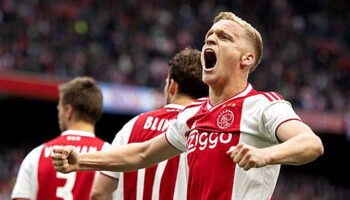 Manchester United confirmed the signing of Donny van de Beek from Ajax on Wednesday in a £35.7 million transfer. The player took the number 34 shirt at the Old Traffo… END_OF_DOCUMENT_TOKEN_TO_BE_REPLACED

With the homecoming of Cristiano Ronaldo and Edinson Cavani opting to stay another year at the club, Manchester United have a plethora of options offensively. Ole Gunn… END_OF_DOCUMENT_TOKEN_TO_BE_REPLACED 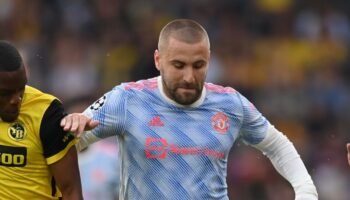 Luke Shaw: Still on the plane back from the Euros?

The 2020/21 season was a career defining campaign for Luke Shaw, for both club and country. After years of inconsistent form, being left out of international squads an… END_OF_DOCUMENT_TOKEN_TO_BE_REPLACED